We are thrilled to welcome actress Gay Soper as the narrator in our new production, Art Sung- Clara Schumann.  In an extraordinary career spanning over 50 years, she has appeared in theatre, operetta, pantomime and on TV. 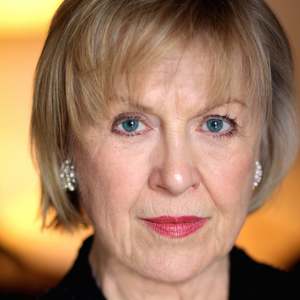 You will have seen her most recently as Mrs Alexander in the 7 Olivier Award-winning production of “The Curious Incident of the Dog in the Night-time”. Other notable roles have included Mme Thenardier in “Les Miserables” in the West End, and George’s mother in “Sunday in the Park with George”. And for a certain generation she is the voice of “The Flumps”, the famous children’s television series.

To find out more about Gay, please visit http://www.gaysoper.com

Gay will be portraying the older Clara conjuring up memories from her colourful and eventful life such as her first ever trip to Russia in 1844 with a somewhat reluctant Robert in tow!

In the 1800s, the glittering court of St Petersburg was becoming a Mecca for musicians and composers: Franz Liszt, John Field, Louis Spohr, and Clara’s great friend, singer Pauline Viardot were just a few who made the incredibly arduous journey to Russian. When Clara and Robert did finally set out, they did so in the depths of winter! Robert had never been and never would be a good traveller, but Clara took everything in her stride and her excitement comes over very clearly in her diary – ‘we drove in carriages and sleighs across the ice of three rivers where the peasants hold their wood market, hundreds of sleighs laden with wood stand in the middle of the river….there are many wolves in the forests here, they often appear beside the highway and watch the travellers as they pass…. I am looking forward to seeing some!’ 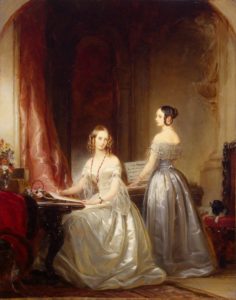 Whilst searching for visual material to accompany the Russia trip, I came across another woman who made this extraordinary journey, the Scottish painter Christina Robertson. Born in 1796, she left her family to travel to St Petersburg via Paris and very soon was appointed court painter to the Russian Royal family. A latter day Gainsborough in her portrayal of sumptuous silk gowns, her work has sadly fallen into neglect. This is her painting of the Grand Duchess Alexandra Nikolaevna, standing by the piano with her older sister, Olga. Clara performed in front of the Russian Imperial family in March 1844. Hopefully by shining the spotlight on her paintings in Art Sung- Clara Schumann she can begin to be recognized once more for the talented artist she was.