On October 24th 1878, Clara Schumann stepped onto the stage at the Leipzig Gewandhaus to play a concert to celebrate her debut in that very building 50 years ago at the tender age of 9! She recalled in her diary, “ the entire audience stood up and a rain of flowers began under which I was really buried! It was a long time before I could seat myself at the piano.” Apparently special posies were sold before the concert specifically to be thrown on stage! Can you imagine that happening at a classical concert nowadays!

Flowers played a very important role in Clara’s life, taking on a special significance when her famous husband, Robert Schumann was confined to the asylum in Endenich (1854-1856) At the suggestion of the young composer, Johannes Brahms, who had stumbled into their lives only 6 months earlier, she collected flowers and pressed them in a Book of Remembrances. She believed that their meaning would help build a bridge from the past to the present for Robert when he recovered from his mental illness. 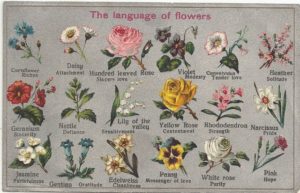 The practise of pressing flowers in 19th century Europe was very common as was the custom of assigning meanings to flowers. This even had its own name, ‘Floriography’ – the language of flowers. We can only wonder what the significance of some of the more obscure flowers in the book was for Clara and Robert.

How do flowers fit into a Lieder recital? Art Sung productions aim to link music, art and narrative in a meaningful way. In the previous production our main character, Alma Mahler, as well as being musician, had a clear link with the Art world. Clara Schumann, on the other hand, lived an artistic life mainly centred around music and at the outset it seemed that it would be difficult to link her to the Art Movement unfolding around her. Her love of flowers therefore provided us with a bridge to the German Romantics’ need to look to nature for inspiration. 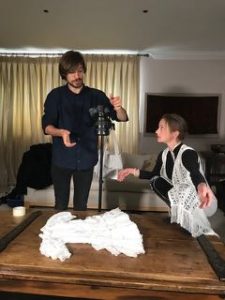 After writing the script, choosing the music and deciding on some of the paintings and visual material which I wanted to include in the production, I then enlisted the help of two incredibly talented artists: the multi-talented Roxani Eleni-Garefalaki, who directed the previous show and here doubles as director for both the staging and the visuals, and English-Finnish artist and filmmaker Nikolai Azariah. Together they have launched themselves with great passion into the creative process of creating a visual narrative which will be as much part of the recital as the musicians and the actress. This involves beautifully filmed short clips which will interweave with paintings by German Romantic painters, original material from the Schumann house, and of course creative use of flowers and their meanings as well as condensed subtitles.