The premiere of Art Sung – Clara Schumann in November at the London Song Festival was enjoyed by a record audience and we were very flattered to receive the following warm words from Barry Millington, the critic of the Evening Standard:

The Songs and Life of Clara Schumann, devised by Elizabeth Mucha with a skilful audio-visual presentation by Art Sung, was a moving tribute to the composer, still underrated in her bicentenary year. The whole thing (performances, programming, visuals) was hugely impressive and enjoyable.

A huge thank you to those of you who came to support us and helped make the evening a tremendous success.  For those of you who were unable to get to the concert, here is the link to a short video capturing some of the highlights: https://www.youtube.com/watch?v=-GxSXb3pg6M 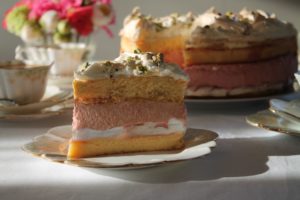 One story which didn’t make it into previous newsletters was our quest to find the recipe for ‘Torte á la Wieck’, a cake which was created especially for the young Clara Wieck in Vienna after her triumphant artistic debut there in 1838. In addition, the Emperor of Austria honoured her with the title of Royal and Imperial Chamber Virtuoso. We know very little about the cake other than it was “an ethereal, light dessert that flew into the mouth of the eater”, as reported in the Vienna Theatre Newspaper in January 1838. As the original recipe no longer exists, we enlisted the help of food historian Annabelle Utrecht to recreate it.

She writes, “After much trial and deliberation, our creation eventually took shape in the style of 19th century Blitz, Himmel and Luft tortes, known for their beautifully matched sponge and meringue layers, and their rich custard or whipped cream fillings. With lightness and sophistication in mind, we chose to bake a yellow sponge infused with citrus zest and orange blossom water. The floral element was a popular flavouring of the period and its inclusion ties sweetly with Clara’s love of flowers. Topping each sponge round is a snow of meringue, garnished with pistachios for crunch and colour. Evoking spring themes, a striking raspberry mousseline adds an elegant, flavourful and feminine character.” 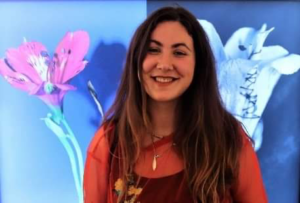 Finally, our warmest congratulations to young artist, Hannah Crooks, whose award-winning photographs are being exhibited at the Royal Scottish Academy’s ‘New Contemporaries Exhibition’ in Edinburgh until 11th March, 2020. Hannah created some of the visual material for Art Sung – Alma Mahler in 2017. To read more about her and her work, please go to http://www.artsung.com/news