Art Sung has gone digital! We are embracing the new normal and producing visual online content for you as it seems that it may still be a while before we can meet again in a concert hall.

Following the success of Art Sung – Clara Schumann last autumn we have produced a short film of a scene which had to be cut from the final performance. In any narrative about Robert and Clara Schumann, the infamous court case between them and Clara’s father is usually mentioned briefly, giving us very little understanding what the 19-year-old Clara went through in those years. Against this background, our film tells the story of her journey and stay in Paris in 1839, the city considered to be the cultural capital of Europe.

We share her anxieties and excitement of being independent for the first time: the responsibility of organising her own concerts whilst travelling across Europe without the protection of a man; her reactions to the frivolity of Parisian society as well as the excitement of performing in Paris. 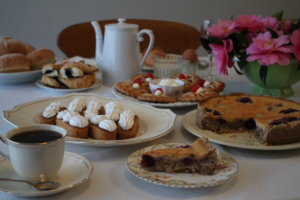 An enormous pleasure during the making of this film was the opportunity to collaborate with food historian Annabelle Utrecht again. If you recall, she created a ‘Torte a la Wieck’ as part of our concert material for Art Sung – Clara Schumann.

For any young person on the brink of adulthood, domestic affairs take on a new dimension. It was no different for our young heroine, the famous piano virtuosa Clara Wieck who had to learn to handle daily chores including making breakfast for her friends.

We asked Annabelle to look into Parisian breakfasts of that era, as this is something that Clara explicitly mentions in her diary. Annabelle threw herself into the project with gusto and came up with a sumptuous ‘breakfast à la fourchette’.

She graduated from University of Exeter with a degree in Drama. Whilst at Exeter she was involved in numerous productions as well as playing a lead character in a long running radio drama set in Exeter, “Union Road.” She is about to graduate from the MA Acting course at Arts Ed and is performing in a filmed production of Caryl Churchill’s “Love and Information” as her final show. A talent to look out for!

Soprano Lorena Paz Nieto takes on the role of Clara’s good friend, singer Pauline Viardot. All the piano music has been specially recorded by Elizabeth Mucha.

To view the film please go to https://youtu.be/xkhh8UmbQVk

Finally, after the success of Art Sung- Clara Schumann at the 2019 London Song Festival we are thrilled to have been invited to join Hennessey Brown Music who are now our new agents.