2021 brings a new collaboration for Art Sung – our third to date! We’re exploring the life of mezzo soprano Jane Bathori, who dedicated her life and talents to promoting the music of her contemporaries: Debussy, Ravel and Satie as well as being hugely influential in the development of Les Six, a group of Paris based composers in the early 1920s. 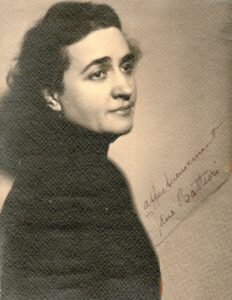 The high point of Jane Bathori’s career was the rare opportunity as a woman to be acting director of the Théâtre du Vieux-Colombier in Paris between 1917 and 1919. The theatre buzzed with concerts of music of all genres: contemporary, mediaeval, classical, baroque, traditional, as well as many inter-art collaborations.

The Théâtre du Vieux-Colombier in Paris had been in the hands of the avant garde theatre director, Jacques Copeau, with whom she had previously worked. The theatre, though small, a mere 300 seater, had become a byword for cutting edge French theatre under his management. He believed that the theatrical space was as important to the creation of a dramatic piece as the director, actors, lighting, music, etc. He also felt strongly that the space should be a blank canvas for the drama to unfold and not to be a distraction for the audience. 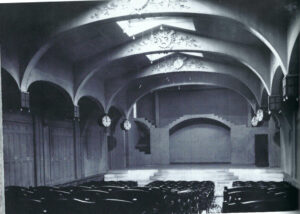 To this end, together with his colleague Louis Jouvet, he simplified the interior of the rather ornate Athenée-Saint-Germain which he had first rented in 1913 and renamed it after the street where it was situated, Rue du Vieux Colombier, making it easier for theatre-goers to find!

This was the theatre Jane Bathori took over when Copeau was asked to take his troupe to New York in 1917 to promote French theatre and culture. In the two years that Bathori managed the Vieux Colombier, she turned it into a centre for experimental and innovative music-making.

This project is based on the extensive research of Prof. Barbara Kelly, Director of Research and Professor of Musicology at the Royal Northern College of Music. Her area of expertise is early 20th century French music and culture, especially issues such as music and war, national and religious identity and anti-Semitism in France. We sat down for a brief chat with Barbara:

What first drew you to Jane Bathori?

I came across the name Jane Bathori in a number of books and articles on early twentieth-century French music.  She was often mentioned in the same breath as the Lyre et Palette concerts that Émile Lejeune hosted in his artist’s studio.  She generally was given a few sentences, outlining how important she was for the careers of Satie, the group that would become Les Six, and Ravel.  These authors, in turn, relied on the memoirs of grateful and nostalgic composers, or at least, those who lived long enough to write a memoir.  It seemed remarkable that a female singer with considerable piano skills could become the Director (however temporary) of an avant-garde Parisian theatre and that she should devote her energies to promoting and performing mainly contemporary music when Paris was being bombarded by ‘Big Berthe’ during WW1.  It also seemed that Bathori’s concerts and collaborations set the priorities of the interwar years in terms of artistic fashion and inter-art collaboration.

How did you discover the connection between her and the Vieux Colombier as it is certainly not well documented?

These often brief accounts whetted my appetite.  I noticed that some of my favourite vocal repertoire was dedicated to and/or premièred by her, such as Ravel’s Histoires naturelles, his Trois poèmes de Stéphane Mallarmé and the Chansons Madécasses, and Milhaud’s Poèmes juifs and his Alissa song-cycle.  Then one day, I found a concert programme and I began to search for more.  After finishing my book on interwar French music, I began a wider search of the Vieux-Colombier archive at the Bibliothèque nationale, where I found many more concert programmes from her time in charge of the Vieux-Colombier.  Finding her letters to Jacques Copeau enabled me to glimpse how she felt, thought and planned when assuming this temporary role.  I was intrigued by her artistic intimacy with Copeau and their shared values and motivations.  Reading further around the history of the Vieux-Colombier, I was shocked by her absence.  For Theatre historians, the war-years was blank; Copeau and his acting troupe had gone to New York.  There was barely a mention of the mainly music events that she put on, but at the same time, my musical sources said little about about Copeau’s theatre and how Bathori began to work for and with him.  It was a reminder of how easily we can miss something if we don’t look more widely.  I discovered that there were two parallel stories, one theatrical and the other musical.  The challenge was to bring them together